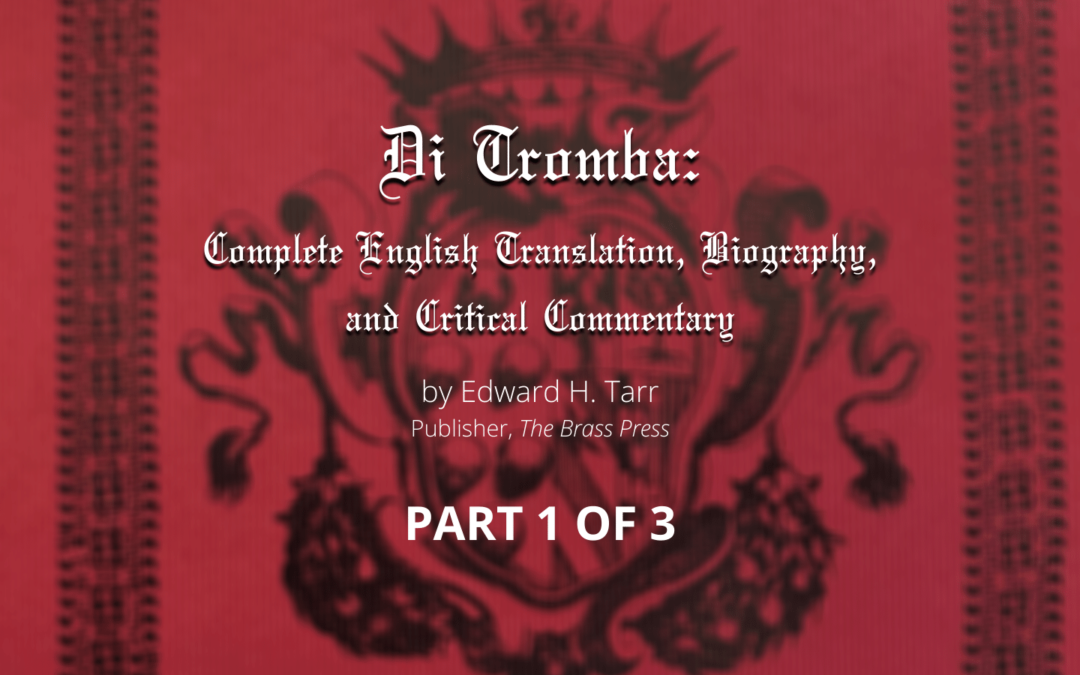 According to the most recent research performed by Igino Conforzi, Girolamo Fantini was born in Spoleto in 1600, immediately precending February, 11, the date of his baptism. Various documents between 1544 and 1606 show the presence in Spoleto of a strong trumpet tradition within which Fantini could have received his training.

On 20 February 1626 he was taken into the service of Cardinal Scipione Borghese in Rome, apparently as the only trumpeter in the noble household. He is recorded there through October 1630.

With the title of Chief Court Trumpeter (trombetta maggiore), Fantini then entered the service of the Grand Duke of Tuscany, Ferdinando II de’ Medici (who reigned between 1621 and 1670). This occurred at the latest in April 1631, but probably at the end of the previous year, since he later stated in the dedication to his trumpet method, printed in 1638, that he had served at that court for eight years. On 11 April 1631 Fantini was given a new trumpet made of silver and lavishly decorated with angel heads and jewels, two damask banners for the trumpet displaying the Medici coats of arms, and a salary of 10 scudi per month. This is an unusually generous sum for a trumpeter and gives a first hint that Fantini must have been particularly gifted. (All the other instrumentalists were paid less; only the singers and the chapel-master earned more.)

His Performance in Rome together with Frescobaldi

Some time in the middle of 1634, Fantini gave a public concert in the chambers of his former employer, Cardinal Borghese, accompanied on the latter’s house organ by none other than the illustrious organist of St. Peter’s, Girolamo Frescobaldi (1683-1643) A fact that has escaped trumpet historians until now is that Frescobaldi had even been in the service of the Grand Duke of Tuscany between November 1628 and April 1634, thus overlapping with Fantini there for nearly three years.

This is the first documented case in history of a performance on trumpet and organ. Documentation is provided by a letter written from Rome by Pierre Bourdelot, a physician and writer on music, to the Parisian theorist, Marin Mersenne, who at that time was preparing Harmonicorum libri, the original version in Latin of his famous later treatise, Hormoni universelle. In his letter, Bourdelot refers to Fantini as “the greatest trumpeter in all Italy”. He also stated that Fantini demonstrated in the concert that he was capable of producing pitches between those of the harmonic series, although French trumpeters present on the occasion had denigrated them as “false, confused, and entirely disordered”.

(However that may be, our experiene shows that such pitches produced by artifice have a different timbre from the natural harmonics. Perhaps the Frenchmen were overly critical, or even jealous.) What did Fantini and Frescobaldi perform? We imagine that Fantini played several of his own sonatas for trumpet and organ that were printed four years later in his trumpet method, some of which contain such pitches. As far as Frescobaldi is concerned, this is the period in which his famous collection of organ music for the Mass, Fiori musicali, was being prepared for the publisher. It appeared in print the next year in Venice. No compositions of his for trumpet and organ have survived, if in fact they ever existed.

Fantini’s reputation rests mainly on the present trumpet method, after Bendinelli’s method of 1614 the second one in history, which he dedicated to his employer in 1638. That he received a special gratification of 3 scudi in the following fiscal year might have to do with this dedication, although final proof does not exist.